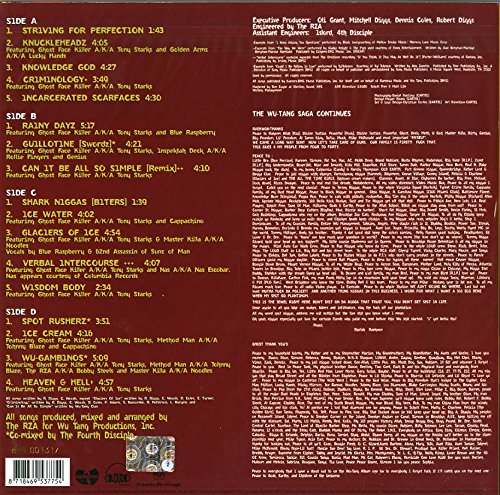 Features:
Disc 1 Tracks
Disc 2 Tracks
Also Available In:
Similar Items:
Editorial Reviews:
Synopsis
Limited 180gm audiophile vinyl LP pressing. Only Built 4 Cuban Linx (1995) is the solo debut of rapper and Wu-Tang Clan member Raekwon. Produced by RZA and starring Ghostface Killah, it features appearances from every other member of the Wu-Tang Clan. It also features an acclaimed guest appearance from rapper Nas, which marked the first collaboration with a non-affiliated artist on a Wu-Tang related album. The album has received acclaim from music critics over the years, with many lauding it as one of the greatest hip hop albums of all time. With it's emphasis on American Mafia insinuations and organized crime, the album is widely regarded as a pioneer of the mafioso rap sub-genre. Along with GZA's Liquid Swords, Cuban Linx... is widely classified as the best solo Wu-Tang material. The album was certified Gold by the Recording Industry Association of America and has sold 1.1 million copies in the United States alone.